skip to main | skip to sidebar

Never Say in an Email What You Can Say in Person---

---and if you resort to email, don't hit the send button until you have thoroughly vetted your response.

I was included in a recent email string concerning recognition and awards.

Apparently, the Department Head (DH) send an email to the LPO requesting status of two awards (I did not receive the initial inquiry). This is the email discussion:

LPO: "The best we can do for Seaman X is an LOA, as for Petty Officer Y he was supposed to turn his brag sheet into me last week, I guess he did not feel it was that important. So now he has until this Friday to turn it in. v/r HM2(SW)

DH: "It is not for Petty Officer Y to turn in a brag sheet for an award. It is for you to gather his evals (he can help with this) and for you to write it up. Remember, awards are supposed to be surprises!!"

I was sorely vexed with LPO's response. Since I was tasked with updating the status on Petty Officer Z in the same message, I asked LPO about the status. "It's on the board convener's desk." Then I asked him why he told the DH that Petty Officer Y didn't care.

"I didn't write that," he protested. "I was just thinking about it."

"Let me show you," I suggested. I read verbatim his email and he put his hand to his mouth. Finally, he said, "I am sincerely sorry. That is inexcusable."

﻿﻿﻿﻿﻿﻿ When we moved to our neighborhood, I thought it would be important to participate in our homeowners association (HOA). My spouse thought it was stupid. Because there are no real checks and balances on HOAs (usually due to an unengaged residential community) and there is no collective overarching belief in community (everyone is out for him/herself), personality conflicts are inevitable.

My HOA board is dysfunctional. I spent the last 15 minutes of the closed session listening to the president, the treasurer, and a member at large complain about and disparage each other. I missed the last meeting because I had a work conflict, but apparently this complaint session was a continuation of the last meeting. Three meetings ago, one of the HOA board members resigned, rather than work with another member of the board. I feel like I'm back in junior high school. If I didn't maintain the HOA website and chair the Social Committee, I might be inclined to pack it in, too. Especially since the meetings occur on the first Thursday of the month, which means I'm missing out on more fun activities to do (Phillips After 5, NoVA ASG Neighborhood Couture Group, watching Rehab Addict). In fact, ANYTHING is more fun than doing HOA board activities.

This article from the New York Times, "Why Some Teams are Smarter Than Others," states that productive groups have good social sensitivity, take conversational turns and share the conversation equitably, and have female members. I can only surmise that, despite having a predominantly female board, we lack social awareness and emotional intelligence. In a town full of former student council presidents, we have some serious power struggles.

When I was first elected to the board, I immediately researched what my role should be. I found the Community Associations Institute and used their materials to draft my impressions of what our web site and social committee should be. The board didn't provide me with any guidance on developing a charter, soliciting members, or giving me a budget. None of them has made an investment in their education on the board (like becoming a member of the CAI), or having guest speakers at the HOA board meetings. The president does not send out an agenda in advance, and the meeting minutes are inadequate: there is no assignment of responsibility and no due-outs. I understand everyone is a volunteer; it's just hard to accept. Maybe they're operating at the higher end of their potential, and I'm being unduly harsh.

The president believes that training offered by the HOA lawyer will clear up some of the problems, but I know it won't. The only thing that will fix this HOA is some mental health sessions.
Posted by Mary K at 4:30 PM No comments:

HBR recently reviewed best evidence for delivering feedback and they recommend against the  sandwich" approach. It risks diluting the primary message and allows the person being counseled to focus on other things (as evidenced by the response from the example to "focus on the incompetent staff on the unit").
http://blogs.hbr.org/2014/06/everything-you-need-to-know-about-negative-feedback/

I am a big believer in rehearsing prior to meeting. There are definitely some things you do not want to say and phrases you want to avoid because they can be explosive or derail the discussion.

I also believe that "Crucial Conversations" has good advice (from their newsletter "Vitalsmarts") when they recommend "getting your heart right" and addressing the mutual purpose with mutual respect. I think this letter on creating a safe environment for discussion (from the employee's perspective) is appropriate for both the employee and the supervisor.

Think Sexual Victimization is Not a Leadership Issue? Think Again.

The fallout from sexual victimization does not only affect the persons being victimized. From an article published in the November 2012 issue Journal of Interpersonal Violence, researchers examined the extent of unwanted sexual attention, sexual harassment, unwanted sexual contact, sexual coercion, and rape within the last academic year and their effects on cadets' and midshipmen's perceptions of their leadership's morality and intolerance for sexual victimization.

They found those military cadets who were sexually victimized had significantly more negative views of their leadership's morality and intolerance for sexual victimization than nonvictims. That's not surprising. Unfortunately, it means that these military members continue their progression in their military careers, but the feelings and experiences forever affect their interactions with others and flavor their responses to situations they encounter in the military, not always for good.

Leaders have an obligation to ensure the safety and well-being of their subordinates. This includes establishing a climate that does not condone these behaviors and that actively works to eliminate or, if possible, to rehabilitate members who display these behaviors. It also means providing emotional and moral support to the victims.

When all is said and done, it happened on your watch.

Overcoming Perceptions in the Emergency Department

I work as a Clinical Nurse Specialist in a community hospital emergency department. My most recent challenge has been ensuring we correct documentation problems on moderate sedation performed in the emergency department that were found as part of our annual Joint Commission self-survey.

Only one out of four procedures were documented thoroughly and accurately. Do I think we are taking short-cuts and harming patients? No. What I do think we're not doing isdue diligence in documenting the work we do and, if something bad were to happen, we have no way of proving before a jury that the work was performed to standard.

The problem is, the ER nurses don't see it that way and I am stymied in how to change this perception. Their first complaint was that the GI docs bring their patients down to do procedures at the end of their clinic day. "These aren't emergencies!" the nurses cry. They don't understand that these patients may not be emergencies, but these cases are urgent in that they drive the next diagnostic decision for that patient. They also don't understand budget constraints.

"If they keep their nurses past their standard working hours, they incur overtime which affects their budget. If there is somewhere else in the hospital that these procedures can be done without incurring overtime, doesn't it make sense to do the procedure there?" That just turned the conversation into complaints about how the ER nurses are dumped on and the hospital takes advantage of them.

I tried the approach that the nurse who is administering the sedation needs to "know" the patient and the best means of doing this was through documentation of the pre-sedation exam. "That's the physician's role," they asserted.

The unfortunate thing is, I think I know how to fix this, but I only have the consultant role in this department. I've asked about the operationalized efficiency of an emergency department that sees patients within 30 minutes and I've been shut down. I've enquired about starting hourly rounding, bedside shift report, and bedside triage when census is low and I encounter extreme resistance from everyone, including the director.
Posted by Mary K at 10:56 AM No comments:

I'm always on the lookout for information or videos that will add to my credibility as an instructor or encourage learners to retain information. I think this video on Bystander CPR is outstanding, one of the most imaginative and visually stunning videos I've seen. Let me know if you think the same! 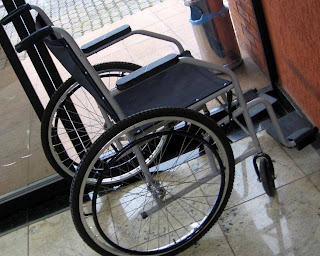 I thought this article published in Health Affairs was incredibly poignant. The stories, or cases, the author, Martin Bayne, presents are heartbreaking. The one that affected me most was the librarian who told him she didn't want to die alone; would he stay with her that night?

In a culture that worships youth, we've forgotten the wisdom our elders have to pass on to us and we've made disrespectful choices in managing our journey of aging.

"To create guine long-term care reform, we as a nation need to perform a series of activities. We must understand the full nature and scope of the problem, including knowing the benefits that are and aren't available under skilled, custodial, and intermediate long-term care. We have to acknowledge the full range of policy options that exist and create a workable way to finance care using a mix of public- and private-sector support. People will also have to acknowledge their personal responsibility for leading purposeful lives, a part of which means considering the costs of long-term care and planning ahead for how to pay for them. In short, we must all be held accountable for ourselves and for the whole."

Everything is at stake. If you want to read more, check out his literary journal: http://thefeatheredflounder.com/

Mary K
I am an expert obstacle remover who works to positively change health beliefs and behaviors. I am a dedicated and enthusiastic role model and realist. I research community resources and explain difficult concepts, treatments, and complications. I love my work and the challenges and rewards I receive.